On top, underneath, all around. I'll leave the details scarce on this one. Here are some photos. 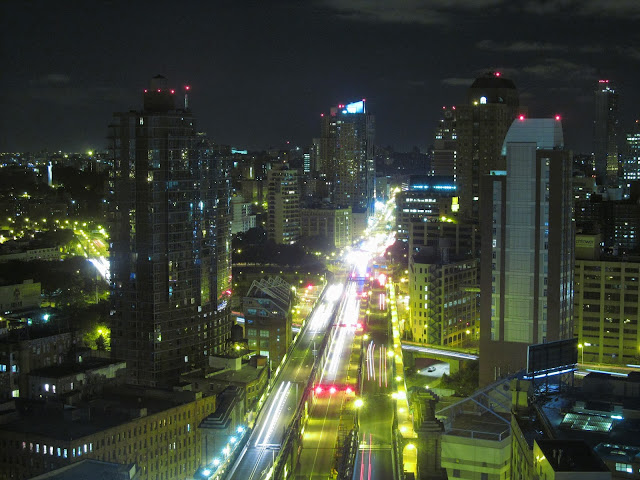 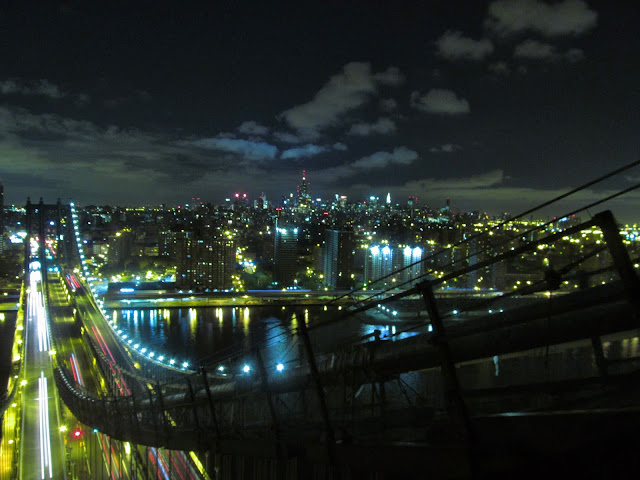 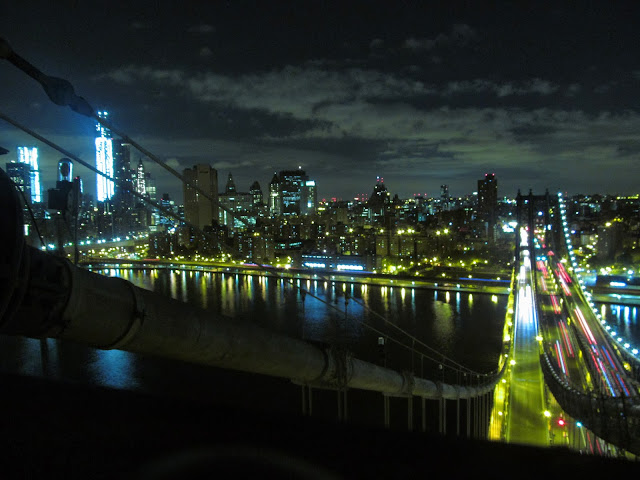 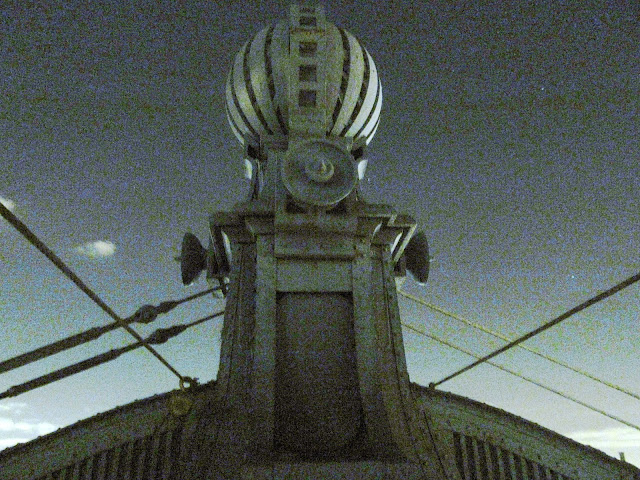 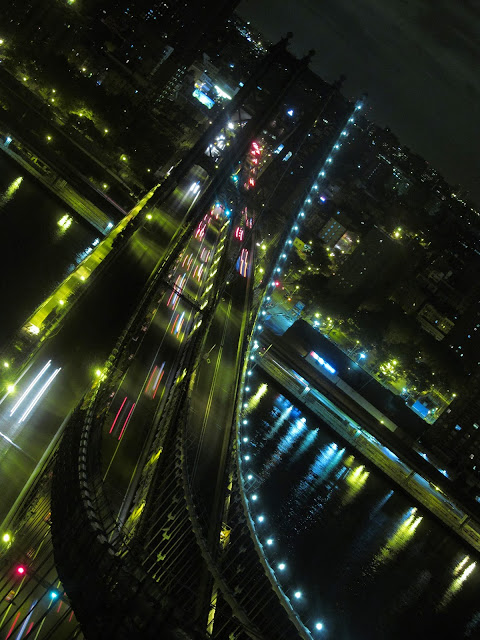 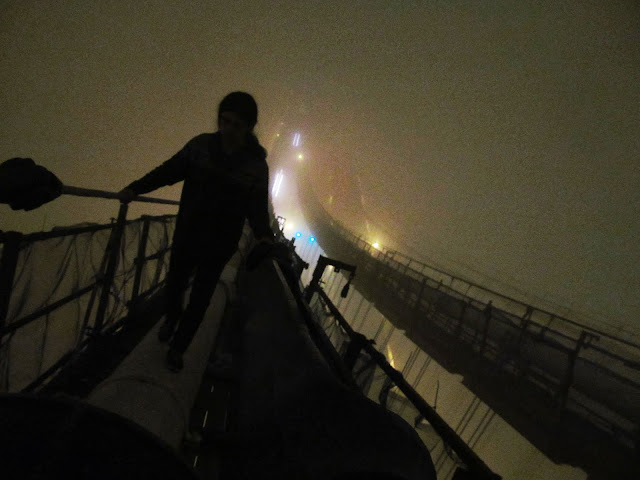 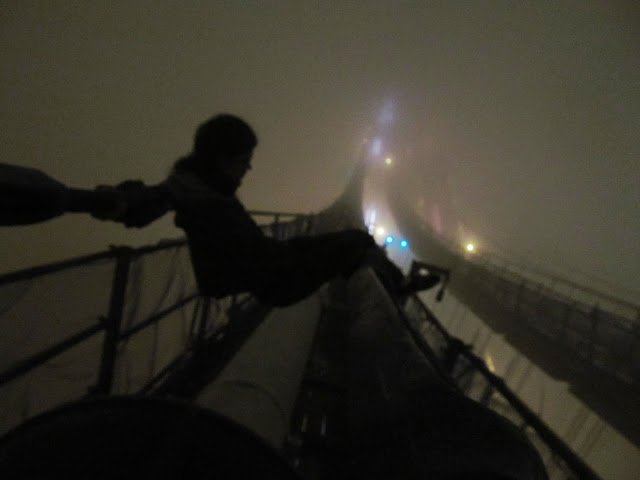 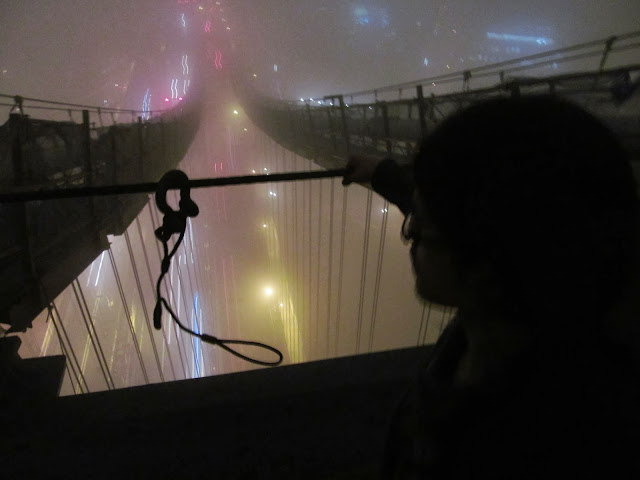 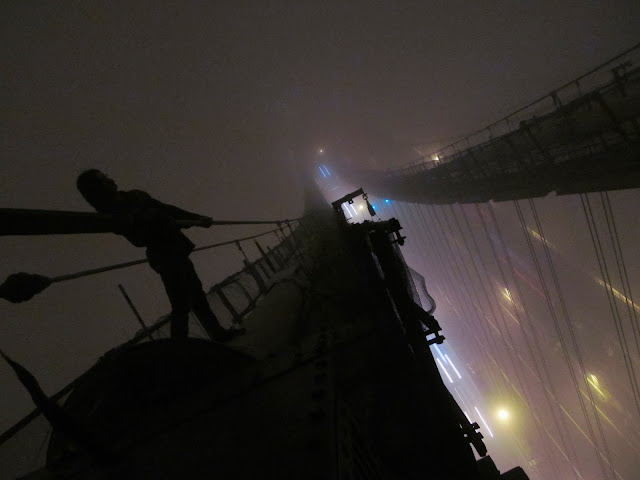 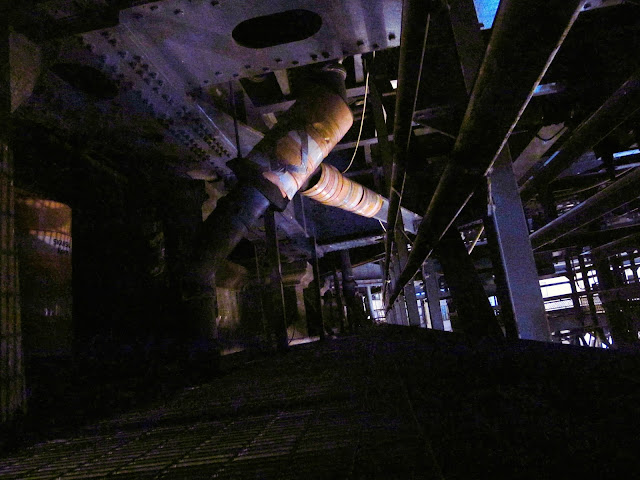 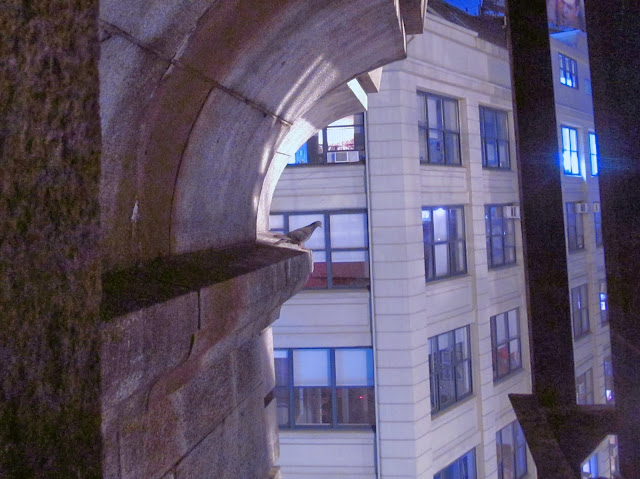 Posted by Daniel at 1:42 PM No comments:

The Observation Towers appeared to stretch from the ground into infinity. I have climbed bridges before, but on bridges the walkway boosts your elevation by about a hundred feet. From my angle, however, I saw the more-than-200 feet of the structure before me extending skyward, my neck and spine arched back so I could fully view the towers from the base. And I suddenly felt very small. 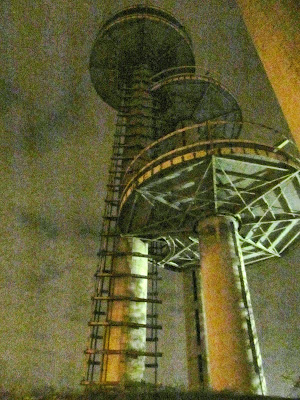 It was about 1 am. After spending some time underneath a storm drain in a park, I had the idea to continue exploring parks, but this time I wanted a different perspective - one from above rather than beneath, one from the nearly 50 year old towers. I slid my backpack through the barely accommodating hole in the fence, and then squeezed my body through. My jacket got caught on the bottom of the fence, but I eventually pushed through.
I was incredibly fortunate to have made it through. Previous access attempts by other climbers have been very complicated - sometimes involving grappling hooks. However, when this site first opened, the view was public. Now, it requires some sneaking around. I was a bit deterred by the cameras that I found nearby during the day, but ultimately made the ascent. As I stepped through the blasted-open door with my partner (that door is now tightly sealed), some graffiti greeted us, which read "Now or Never" 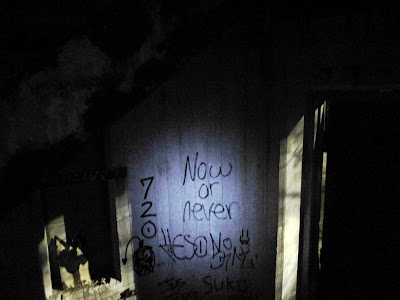 We snuck very carefully around each tower, only occasionally letting our cameras peek over the barrier, and stepped as lightly as possible on the deteriorating staircase that donned the interior. Fortunately we made it up to the top floor without incident, with only a busted out staircase preventing further entry. 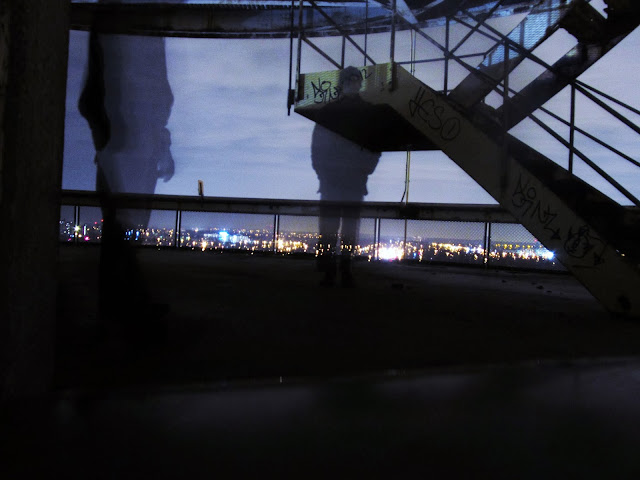 Despite the night being windy and wet, we ascended to the very top level of one of the tallest abandoned structures in NYC. I could almost touch the red light blinking at the very top. We saw bikers taking a late night ride, and the Unisphere glowed in the distance. Here are some more photos from that night. 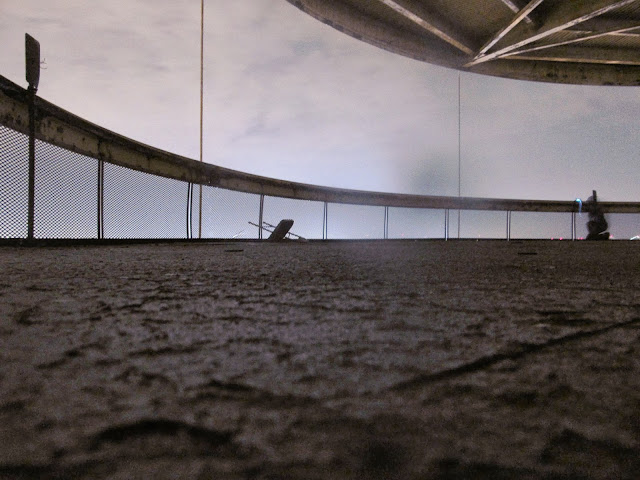 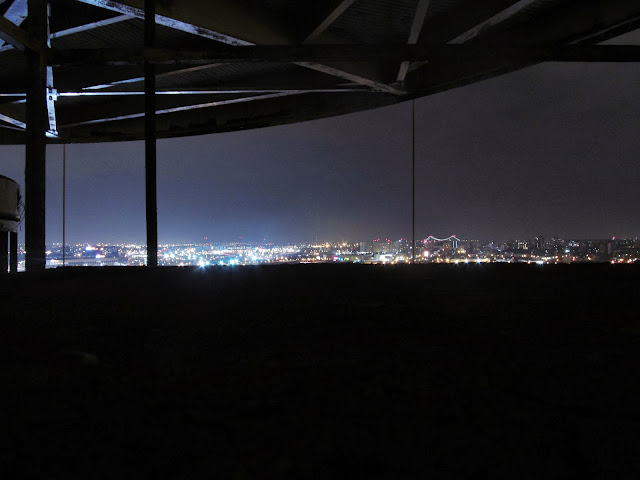 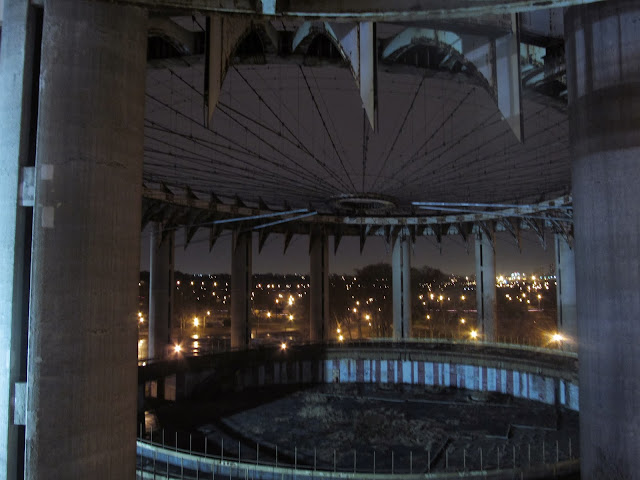 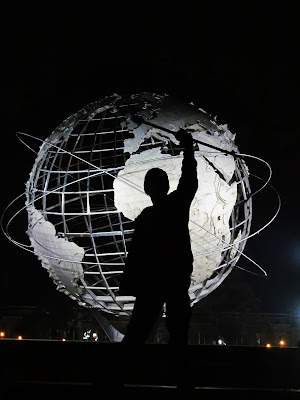 The Philly trip was unique in that it was the first trip I had planned with the sole intention of exploration in mind. We had gathered up our money through the months and invested it in a visit to a different city, and we had decided on Philadelphia. Coming from New York, we had seen all types of security. Therefore, the sites we found were much easier to get into than the ones we had back home. However, there were still tense moments and tales of escape.

After spending time settling down in our hotel during the first day, we met up with an old exploring partner, a Philly native, to walk through the ghetto of Philly until we reached the Reading Viaduct, an elevated segment of rail, though the track had been removed a few months prior to our visit.

However, the view of the city at night was stupendous, similar to walking on the Hell Gate bridge viaduct, and some tire swings hanging on rusty trestle were a fun introduction to the city. Against our native partner's will, some of our group ascended the trestle towers, and even knowing that it was not a late enough hour of night to ensure our invisibility, we went for it.

To our great dismay, we quickly learned a few negatives about the city. For one, public transport was incredibly expensive. For another, it didn't run on a 24-hour system. The train was closed by the time we reached the station so we sought a bus, and were stopped by a neighborhood watch car, the passengers asking us why we were running. We told them that we only needed to catch our bus, and they left us alone. When we got in the bus, we saw that the locals were all falling asleep even though it was barely past midnight. It suddenly became very clear to us why New York is known as the city that never sleeps.

A loud knock at the door interrupted my sleep in the morning.
"Who is it?" one of my friends yelled.
"Philadelphia Police," responded a gruff voice. My heart skipped, and I wondered what was going on.
Of course, my fear turned out to be illogical as it was merely one of my partners who had been locked out of the hotel room, messing around with us. The above structure is the abandoned Divine Lorraine hotel, and it is fortunately not the hotel we stayed at, but unfortunately, not a hotel we managed to explore, as we were told that there was no way to sneak into the building.

When we hit the town, we walked until we reached the abandoned City Branch tunnel, and from here our day's adventure began. The tunnel has an abandoned spur and an active one. Following the active one leads to a darkened freight tunnel, while going too far in the abandoned one led directly to a police precinct. Some graffiti artists we had seen at the mouth of the cave warned us of a girl getting arrested because she walked too far into the tunnel. Keeping a steady limit on where we would walk, we checked out the tunnel.

Afterwards, we continued walking the freight tracks, having to hop over and hide behind rocks when we heard the train come rumbling towards us. The long whale of a vehicle slooooowly dragged itself on the track, and as we ran alongside, it seemed that the freight cars would never end. However, if eventually did end.

Along the track, we spotted a work truck on the railroad and bolted away from the area, only to return to the track half a mile later via the woods. Eventually we walked on an overpass that spanned the length of a picturesque river. What was not so beautiful, however, were the grates we were walking on, which frightened us as we could see directly below the thin beams that "supported" our weight.

Crossing the river we found our way into the massive abandoned Tastykake factory, which had once been a bakery. Though the relic was left exposed to the elements, adjacent stores still sold Tastykake products, and I bought one simply for the novelty.

The true splendor of the Tastykake factory was to be found on the roof, climbing the water towers and watching the sun set from there.

I promised my friends that there would be no more track walking, and insisted that we would do some climbing instead, but to their dismay there had been a hell of a lot more track walking as we met with another native explorer who was a huge railfan. In total, we walked at least ten miles that day.

The stretch we walked over was intriguing as it ran over a river, some roads, and by factories, all of which glowed at night. Again, the tallest point of the stretch had metal grates, which we kept telling ourselves were meant for fat workers to walk on and should thus support our weight. However, this hope was little consolation for the panic that ensued as we looked down, and we knew that if a freight train appeared we would have to climb onto iron beams jutting fifty feet over the water and duck there, a task which is terrifying when winter winds whip, threatening to knock you off your perch. Fortunately, no trains came.

The freight tracks eventually connected to Amtrak and SEPTA tracks, the latter being Philly's official commute track. With six people, we walked the commercial rail and snuck back onto the platform undetected as early as 9 PM, a feat which would be unfathomable back in NYC.
Though one of our guides knew how to read the rail signals, it was tough to avoid being spotted, and we often only had a moment's notice to bury ourselves into bushes or hide behind pipes as a train rolled by.

Our third and final night in Philly left us with heavy rain, which dampened the streets and our party's spirits as well. However, a faithful member of the crew stayed with me as I promised him some rooftop adventure...we were not leaving the city without seeing it from above first. At a late hour, the rain poured into City Hall as we waited for our contact, who took us into an abandoned bank.

Calculating the right moment, we slipped in through a loose plywood board, shifted our way through a broken glass door, taking care not to get scraped. Down in the basement we saw bank vaults, which had been busted open and their emptiness made any noise inside them reverberate. Then, we walked up the twenty or so flights of stairs until we reached the roof, and the fog descending on Center City illuminated all of the city's lights. I sat on the edge of the roof, watched the passerby and cars below, and let the noises waft up to me.

We went to some lower floors where we discovered twenty year old chip bags, one of which we opened for curiosity, which stank horrendously, and a newspaper even older than the chips. Getting out of the building was a slightly more tricky task as people on the street could see us but we couldn't see them. Praying that our timing would be right, we slipped out, spotted only by a homeless man who clearly wouldn't tell us off.

Philadelphia had shown me how different exploring can be in different cities. Sure, Philly was derelict and decrepit (both the buildings and some of the people), but when I sat on that rooftop watching the lights of Center City change color from two hundred feet above, it made me feel that there was something intrinsically magical about the city.

But my heart still belongs to New York.
Posted by Daniel at 11:59 PM 1 comment:

Daniel
I hope that through my photography and stories, I can capture lesser-known parts of the city. .......................... I always like hearing information, exploration and whatever. Click the, "view profile" below and then click, "Contact me" next to my thumbnail.